How I Increased Organic Search Traffic by 900%

I​ had been working pretty hard at improving my on-page and technical SEO for my wine blog, Honest Wine Reviews, during much of 2019 in order to get more search traffic.

And I was definitely getting some traction.

But, in early November of 2019 everything changed.

Organic search traffic started taking off like a rocket!

Right around that time, day after day, I kept seeing search traffic going up steadily.

Maybe a little slow at first, but like a rocket, as it gained momentum it just kept going. 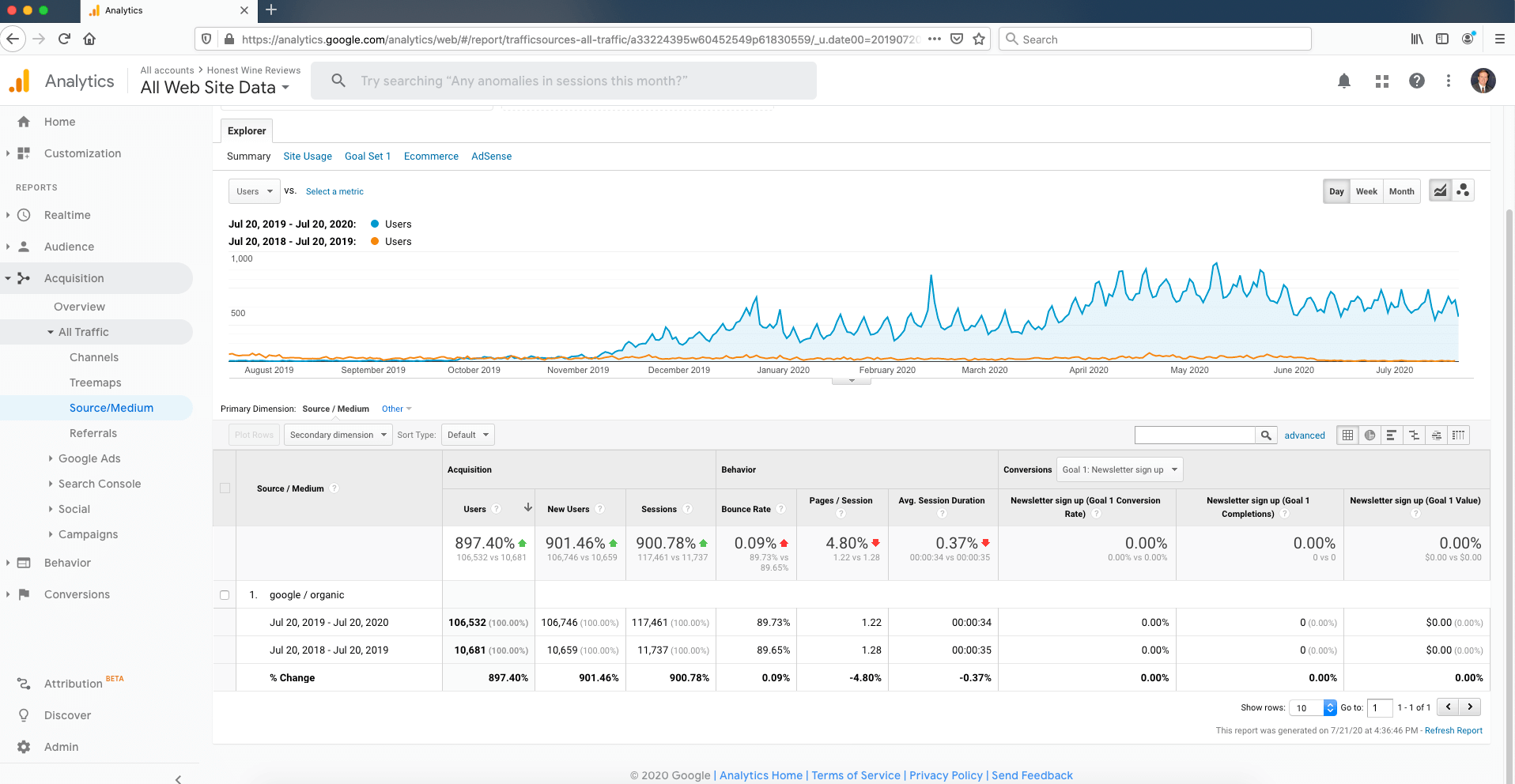 Here’s a look at my Search Console data:

As I mentioned at the beginning of this post, I had been working on improving SEO for my site.

And as part of that, I had been paying attention to what Google had been saying webmasters should be doing.

Specifically, I did the following:

I did a number of other things too, including all the stuff I talk about in my Blog Post SEO Checklist:

Now to be clear, it’s not like I knew an algorithm update was coming and I was trying to prepare for it.

What I was doing though, was listening to what Google had been saying about watching out for bad links AND publishing high quality, relevant content that satisfies a user’s intent.

Then, that November, a big algorithm update dropped and I firmly believe it rewarded the work I did on my site.

Here’s what it was…

The Google Algorithm Update of November 8, 2019

If you pay attention to the world of SEO (which I do, closely), November of 2019 was a very active month for Google Search Algorithm updates.

But the update that really got everyone’s attention was the Google Algorithm Update of November 8, 2019.

Google even addressed it in a series of tweets from the Google SearchLiason. 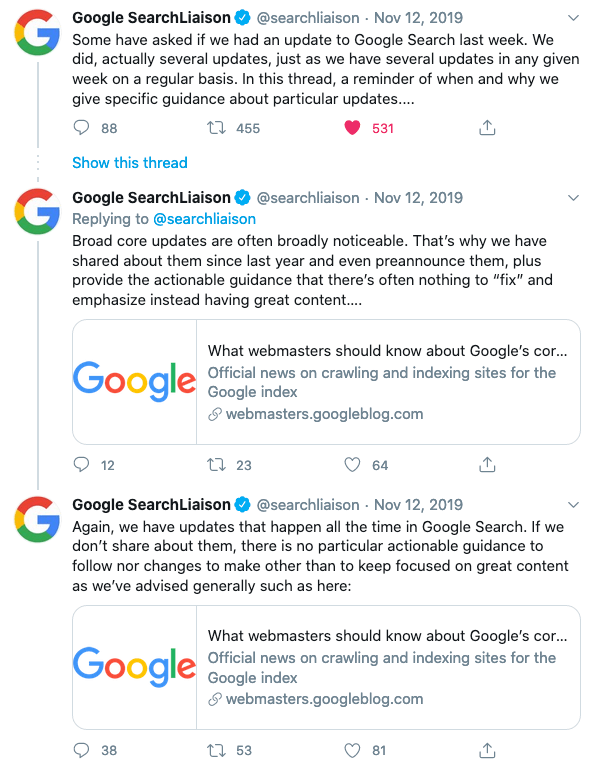 Now of course Google didn’t give any specifics of what the update targeted or provide any guidance about what to do.  They rarely do.

But, once all the dust settled, the general consensus was that it revolved around a few different things, including:

So let’s start putting all this together and how it relates to my site’s 900% search traffic increase.

My theory is that when the November update crawled the sites with the bad links to mine, it used the disavow file I submitted and stopped counting those links against my site.

Speaking of links, I’ve never tried to get backlinks to that site, or to this site for that matter.

Over and over again Google tells us not to try to get backlinks, since they’re unnatural links to your site.

If you have to ask for a backlink, it’s not a natural link and Google will penalize you for it.  Simple as that.

I don’t understand why there’s still so many people out there trying to get backlinks.

My wine review site has over 200 wine reviews that have been specifically crafted using on-page SEO in order to satisfy the intent for someone searching for a review.

That’s a lot of wine reviews!

In other words, lots of content that is 100% relevant both at the site level and the post level.

So, my theory is that when the November update hit, it was super-obvious to the algorithm what the site was about.

I also believe this was a case where Google improved its ability at recognizing relevance.

Perhaps my site was already pretty relevant but was being held back?

You see it’s not just whether your site is relevant or not.

And now Google is better at it.

That’s what I think.

Final Thoughts as to the Search Traffic Increase

So here’s my final conclusion, putting it all together:

With the November 8, 2019 update, Google’s algorithm rewarded my link disavows and improved its own realization of the relevancy of my site.

By rewarding my link disavows, Google opened the flood gates to allow the site’s relevancy to take center stage and as a result, search traffic increased 900% year over year.

That’s what I think happened.

So what do you think?

Leave a comment below with your thoughts or even a question about SEO, if you have one.

How to Start a Tailwind Tribe Step by Step [WITH VIDEO]

How to Start a Tailwind Tribe Step by Step [WITH VIDEO]

SEO Basics: 13 Proven Tips to Get Your Website Search-Ready

SEO Basics: 13 Proven Tips to Get Your Website Search-Ready

HTTP to HTTPS: How to Migrate Your WordPress Website

HTTP to HTTPS: How to Migrate Your WordPress Website 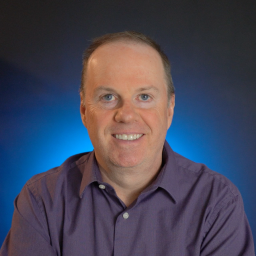 SEO doesn't have to be a struggle.  Signup below to get your free Blog Post SEO Checklist. 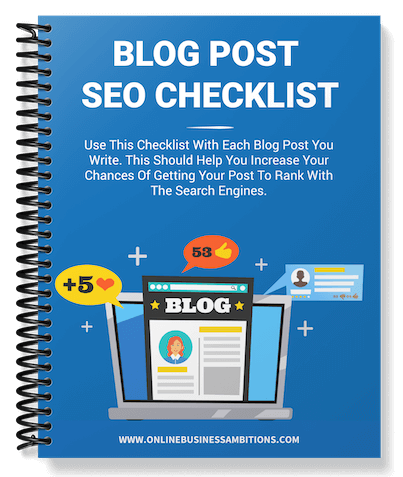 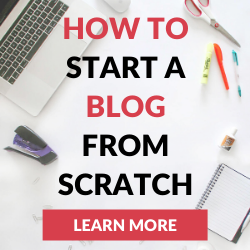 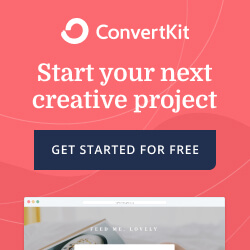 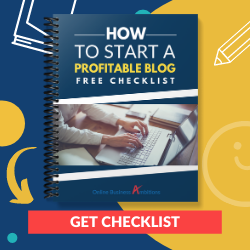